Getting the Garden Started for Spring 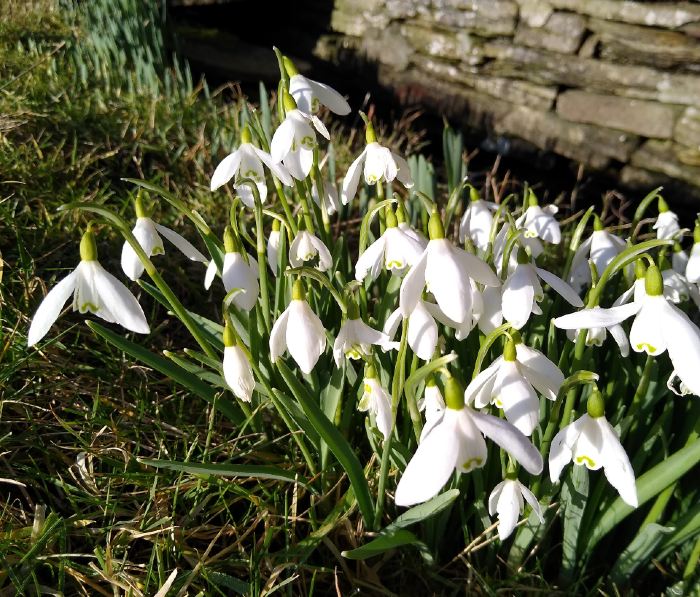 As soon as the snow melted, spring arrived on our little island and it has been gladly welcomed. Suddenly the air is full of the sounds of bird calls once again, the willows in our garden are bursting into a mass of fluffy white buds and there are huge drifts of snowdrops everywhere.

Spring means that I need to get busy in the garden. I grew a lot a lot of vegetables last year, but this time round, I want to grow more varieties and get some fruit started.

More fruit and veg will need more space, so I will be starting two new, no dig beds, as well as giving the existing ones a bit of a boost.

When we moved to the island, there were no existing veg beds on our land. Our 1900’s farmhouse was part of a larger farm, which has been split and sold to various people over the years. We did discover several blackcurrant bushes hidden away in our woodland garden though, so I am planting our new fruit bushes, in amongst the shelter of the trees as well.

I feel slightly doubtful that they will grow there, the ground becomes waterlogged during the winter, because of a thick layer of moss. The soil underneath is like clay and yet we had a good crop from the blackcurrant bushes, which had not been cared for, for some years.

So I have planted redcurrants, gooseberries and blueberries and I am keeping my fingers crossed. If they seem to be struggling, I can always move them.

I also promised my son, that I would get some rhubarb started this year, but I have put that in the shelter of our small, walled kitchen garden. At the beginning of last year, this space was just lawn, surrounded by fuchsia and roses. I decided that it was the perfect place, to start our vegetable growing adventure. I have given the rhubarb it’s own small bed, where it should have space to grow plenty, for our hungry family.

We grew some leafy veg and peas in this bed last year, but it didn’t do as well as some of the others. I think that this was because I didn’t prepare it as well as I should, so before starting my rhubarb, I decided to put that right.

First I added a layer of partly broken down compost from our heap. I added some leaf litter here as well. Then I added a sackful of veg scraps and little cardboard pieces. I had some winter purslane and kale left in our hugelkultur bed, so I pulled those and popped them on as a last layer before the paper.

I used a thick layer of wet paper, over the whole bed and then made holes just big enough for my rhubarb plants. Finally, the whole bed got a good thick mulch of seaweed.

I am starting some seaweed tea and as soon as it is ready I will add some to the rhubarb patch. I want it to get as good a start as possible, so that next year we will be able to enjoy it! 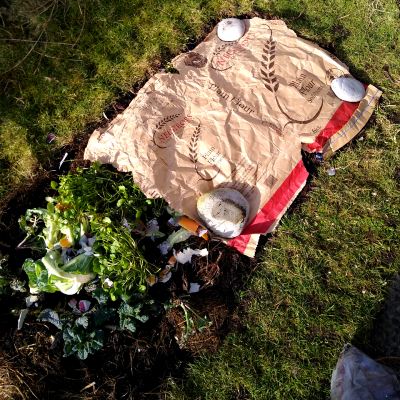 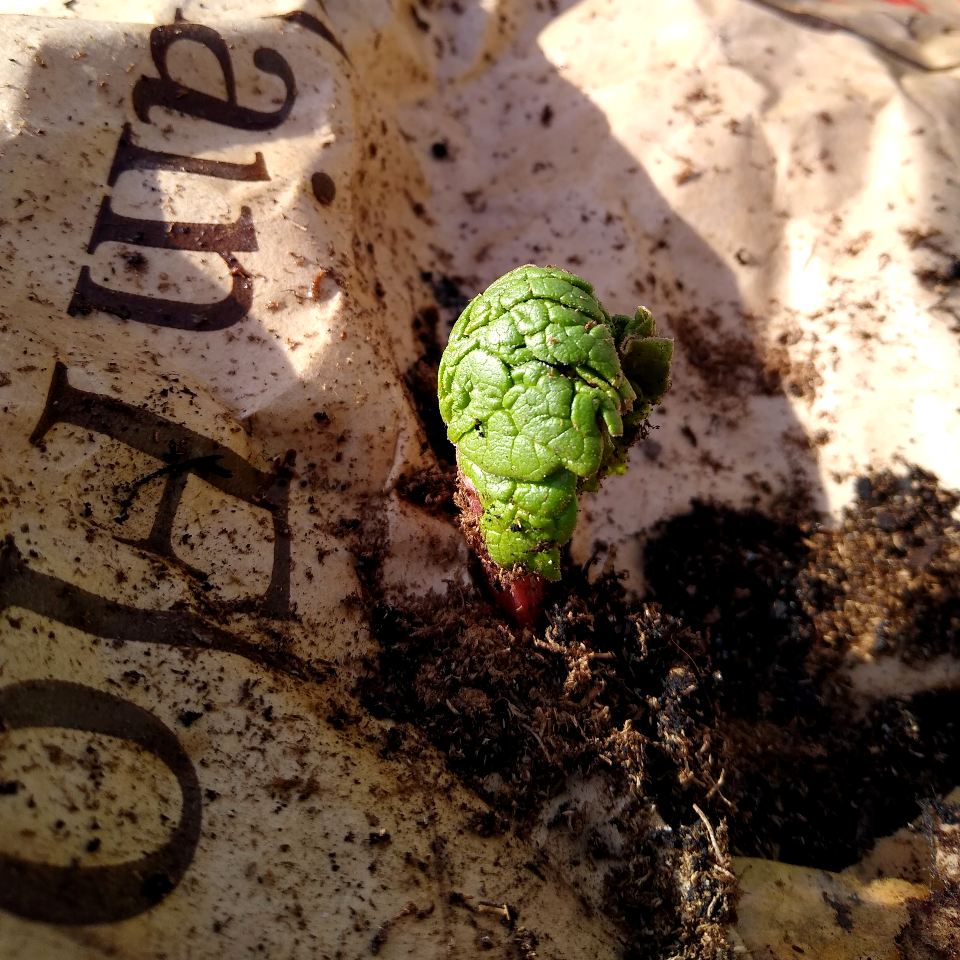 With that done, I turned my attention to improving the health of two of my veg patches from last year. They did very well, considering that it was the first year, but I knew very little when I started and I want to take the time to put good thick layers down now.

These beds are much bigger than the rhubarb patch, taking up half of the kitchen garden together, so I needed to use something that I had plenty of. I started with a thick layer of last season’s grass. We allow the grasses to grow waist high in large areas of our land, so I have a good supply that has been cleared, ready for this years new growth.

Another bed layer that I have in plentiful supply, is leaf litter. Two thirds of our land is covered in trees. I didn’t get round to raking all of these up at the end of autumn, so I was able to collect bucketfuls this weekend.

I really must invest in a wheelbarrow this year, it would make my work much easier!

The leaf litter around our sycamores, was particularly good. Here it is mixed with old growth from the great wood-rush which grows in a thick blanket, as well as ferns. It really had at least a couple of seasons worth of litter and was well broken down, so I mixed it in with the willow leaves from the rest of the garden and added it to the beds. 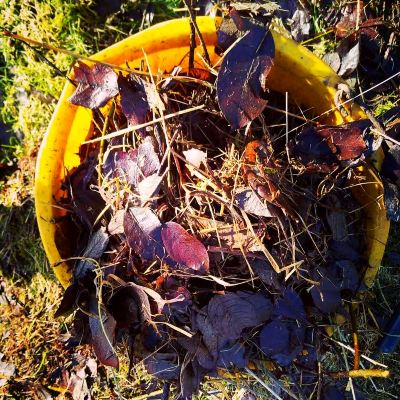 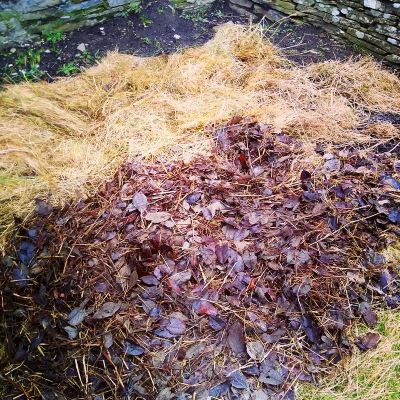 Over the next couple of weeks, I hope to prepare two new beds in our kitchen garden, which will then be completely full, apart from paths.

This year, I am also starting a garden full of plants for use in my basketry and natural dyeing. I am adding in a few flowers that are good for drying or using in paper making. Rather than a dyers garden, it is really a complete craft garden, so I am allocating a large portion of the land to the side of our house for it. I have a few rose bushes to remove, but most will remain to give shelter to the young plants from the wind. I will also be adding some New Zealand flax, which as well as being excellent for weaving, creates a good wind block.

There is a lot of work to do in this area, but with the first of the young flower seedlings already started in our little indoor growing space, I really need to get going over the next few weeks.

Statice and coreopsis seedlings are already peeping through the soil, whilst my woad seeds have started the long process of germination, first in warmth, then in the fridge and finally back to warmth. I am keeping my fingers crossed that they grow. I am still a very inexperienced gardener and this process is new to me. 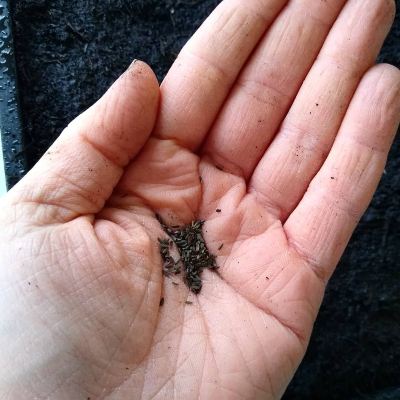 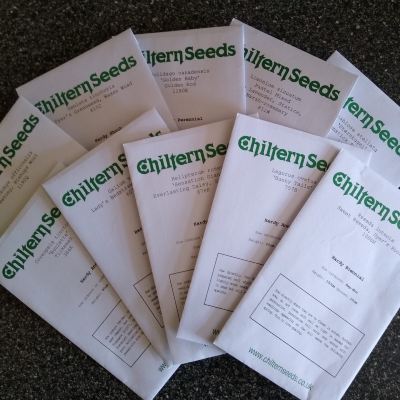 The spring sunshine has been filling our little indoor growing room, which is quickly filling up with seedlings. Chard and spring onions which I planted in the winter, are now putting on a spurt of growth, while the broad beans and radishes that I started a couple of weeks ago, are up and doing well.

It is still too cold for germination in there, so our house is full of seed trays. As soon as they poke through the soil, they get transferred to the growing room.

My thoughts are now turning to making more cold frames and cloches for their first days in the garden and this year I am well armed with garden fleece, ready for any unexpected cold snaps. 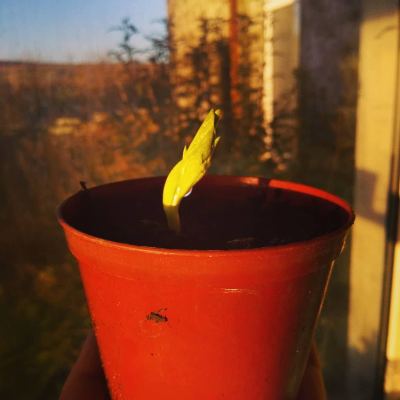 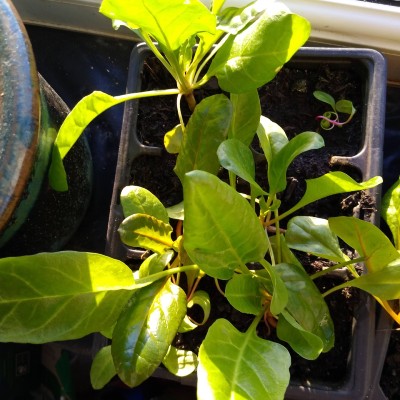 I am really happy to be growing things again and I feel like I am waking up from winter as well. Growing a garden full of plants is such a positive thing to do and I can’t wait to see what we manage to achieve this year!