We love foraging and back in Cornwall we knew all of the best places to go for blackberries, hawthorn, sloes, wild apples, pears and wild garlic. Now that we’re living in Orkney, we’re having to start over, because we don’t really know what is available or where to find it. Lots of people have told us that there isn’t much to forage for here, others have said that there is, but they don’t want to give away their secrets.

If there is food, you can bet that we’re going to find it eventually! After all, we have a big family to feed and a very modest income. Not only that, but I think that it is a wonderful thing for children to be able to pick something and then see it all the way through to making something with it. It gives you a sense of satisfaction that you just don’t get with foods that you have bought, so I want to give our children plenty of chances to forage and to grow their own food.

We have used dandelion leaves in salads before, but my kids find them too bitter and we have used them along with nasturtiums and spinach to make pesto, but we have never used the flowers. Having seen lots of people making dandelion syrup and dandelion jelly on instagram, we decided to give it a try. It is supposed to taste very similar to honey, which we love and dandelions grow in abundance here on Rousay. They are literally everywhere that you look at this time of year and as they don’t spray the verges on our island, they are good for picking. Our garden alone probably has enough dandelions to make a few pots of jelly! 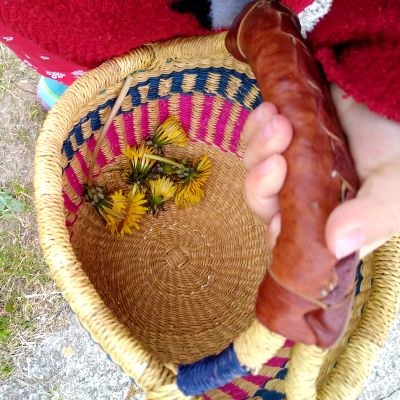 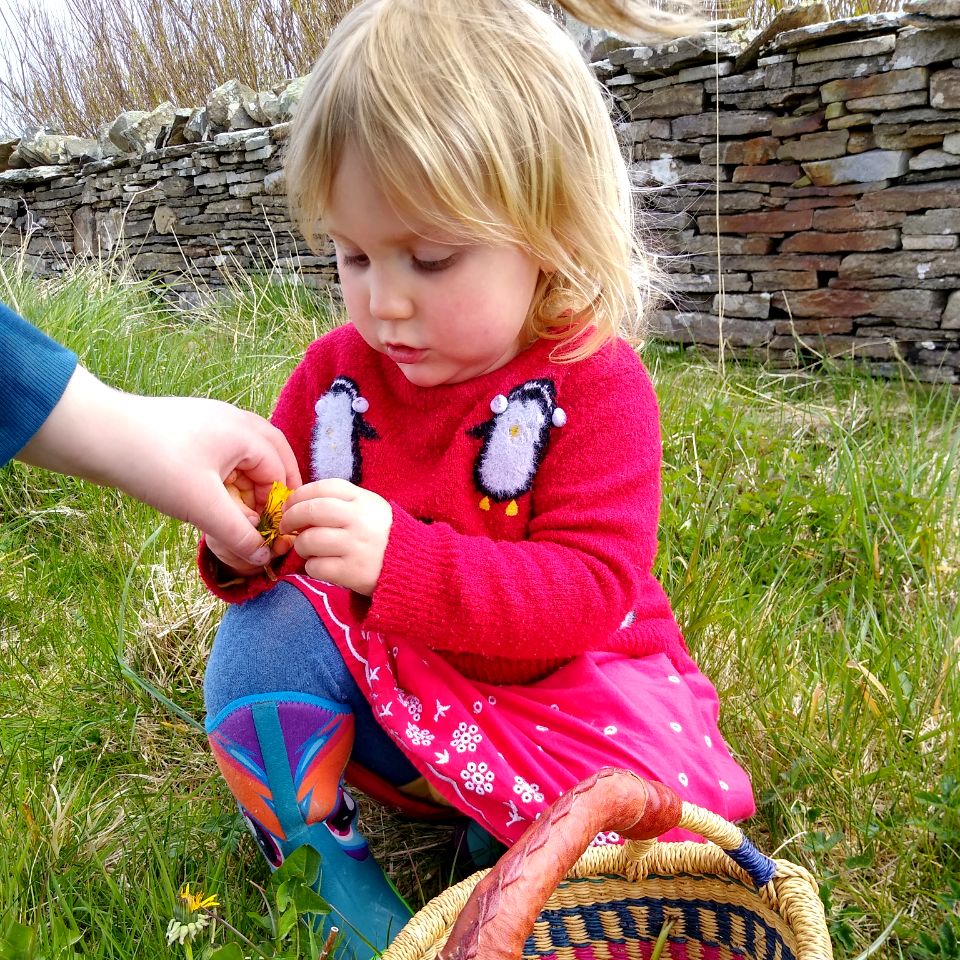 So I set off with Lark and Wren, to fill a basket and a cauldron with dandelions. It was one of the chillier May days in Orkney, but the dandelions were looking glorious and we saw several Tiger Moth caterpillars happily munching the leaves. We didn’t disturb any plants that had already been claimed by tiny creatures – they need them more than us. They were fascinating though and if we hadn’t had a task to do, we could have spent ages just watching them.

Our baskets filled very quickly. We only had to walk up our road to get enough, even though we were leaving plenty of flowers in each patch.

Lark was really interested how we were going to make preserves from the flowers, so she helped to prepare them all, painstakingly removing all of the petals but avoiding the green parts. The resulting pile of petals was so wonderfully soft, that it seemed a shame to cover them in water, but we did and then brought them to the boil to make a kind of tea.

We left the tea overnight to really let the flavour develop and then used an old (but clean!) muslin square to strain out the petals. The recipe that we were following said to give them a really good squeeze and we were left with a ball of petals. We thought that it looked really nice so we’re trying to dry it out in the airing cupboard, but I’m not sure that it will work.

Then we boiled it up with lemon juice and liquid pectin. It was a bit hit or miss, because we could only find a recipe with powdered pectin. We decided that if it didn’t set we could just use it as a syrup, so it wouldn’t go to waste either way.

We finally managed to get a bit of a wrinkle when we poured some on a cold plate and poured it into sterilised jars. I did this bit, because it’s a bit awkward and very, very hot.

It turned out to be somewhere in between a syrup and a jelly, but is delicious and perfect spread on some freshly baked bread. We would definitely make it again and as the dandelion season is long, we are keen to try making cordial with it as well. Hopefully, we will find lots more things to forage for this year and get to explore this beautiful island at the same time. 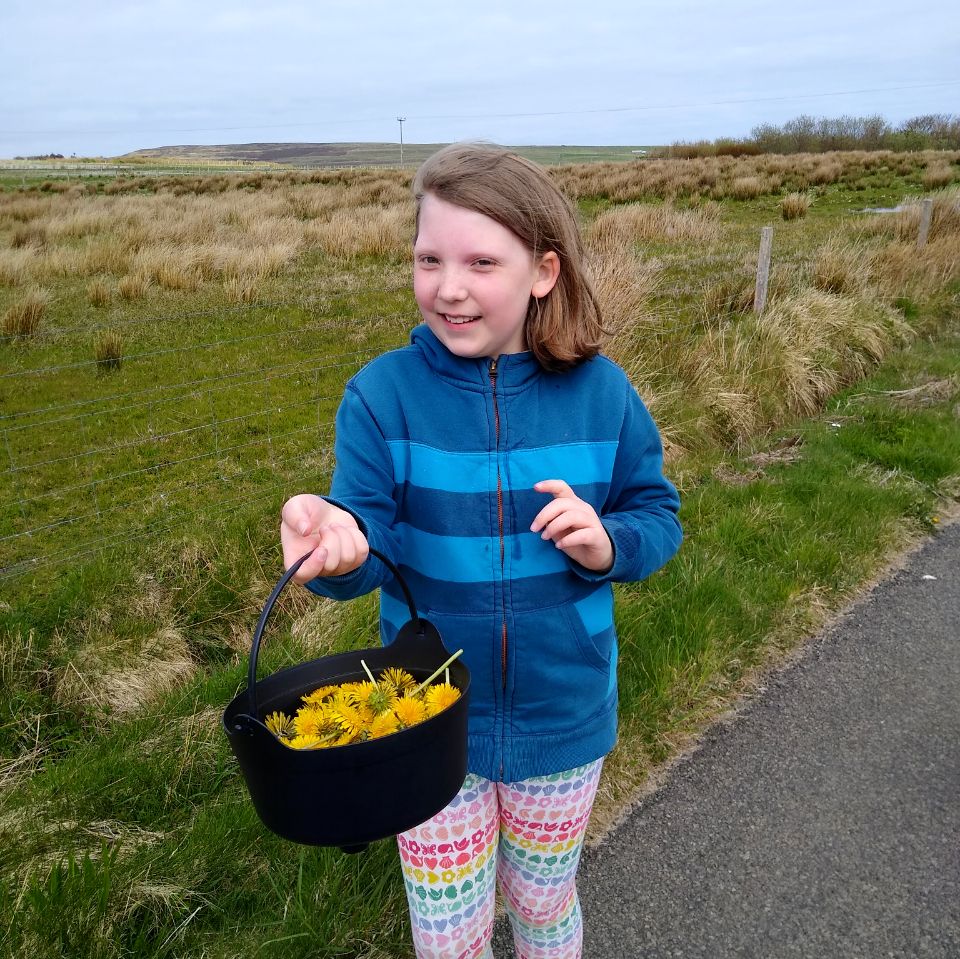 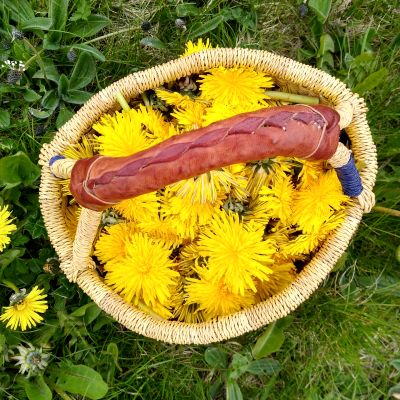 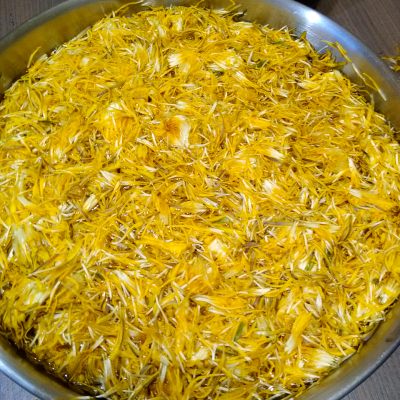