Daffodil Dye and a Basket Experiment 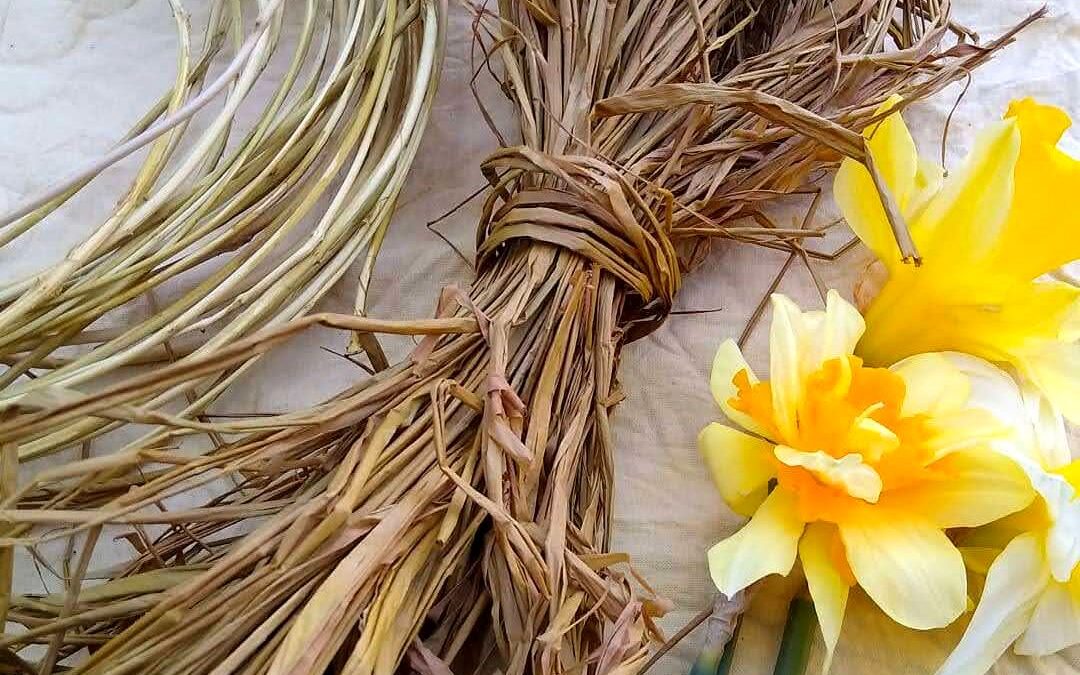 April is coming to a close, but it has been a month of working with daffodils for me.

This time last year, I was at the beginning of my journey of working with plants for basketry and dyes. I did collect some daffodil leaves as they faded, but I was keen to make as much use of these lovely plants as I could, this year.

For me, spring is so full of potential, so full of joy. Here on this small island in the North Sea, you really feel that the world has woken up from a deep sleep and that suddenly everything is bursting into life.

Daffodils are the island’s first big crop of flowering plants and my heart sank when 60mph winds and snow, left many of them flattened and tattered. I quickly gathered the damaged heads and left them to soak in water for a few days. I found that I had to put some large rocks on top, to keep them under the surface.

If you decide to have a go at making daffodil dye yourself, it is important to leave the stems and leaves growing, until they fade. They help to strengthen the bulbs for the following year. 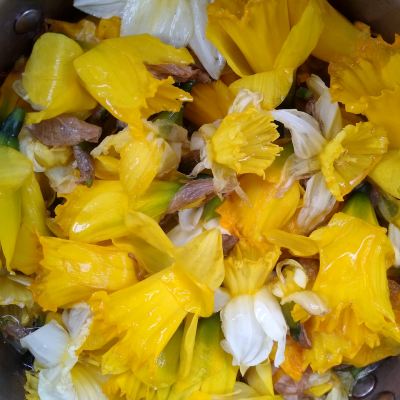 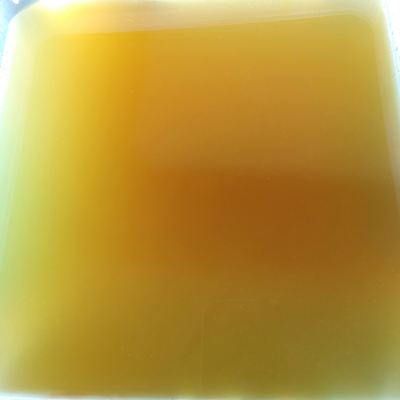 After soaking, I gently simmered the flower heads and water for roughly half an hour and then left them again, overnight. I was very pleased the next day, to find that the resulting dye was a good yellow colour.

I had already prepared some raffia, a cotton bag and some honeysuckle vine, by gently heating and soaking them in an alum mordant. The raffia had also been given a willow bark pre-mordant.

The dye was heated again and I added the things that I was testing. After a little while on the heat, it was all left overnight, then rinsed and dried.

The honeysuckle and cotton were a primrose yellow once dried and the raffia came out a rich gold.

There’s nothing like a new colour for inspiring a bit of basket making, so I got straight to work.

I am keen to keep moving forward with my work, constantly trying and learning new things. I don’t want to fall into the trap of always working within my comfort zone, producing many similar items. To me, it would feel like having the same conversation over and over again.

I often feel like creating something, is having a conversation with the materials that you’re using. I want to keep those conversations fresh and vibrant.

So this time, I decided to combine a coil base with twined sides.

I have tried a little twining, last year, with some common rush from our garden and with some New Zealand flax fibres. It’s a weave that I greatly admire, but up til now I felt that I my attempts had been a bit shabby. My main problems had been with the tightness of the weave and not mastering the use of a mould.

This time around, I decided to try without a mould, but quickly found that I was having the same problems. The tension was all wrong and the shape was decidedly wonky. I love wonky baskets – but only when they’re intentional!

So, I unpicked it back to the base and found a wooden pot that was roughly the right size. 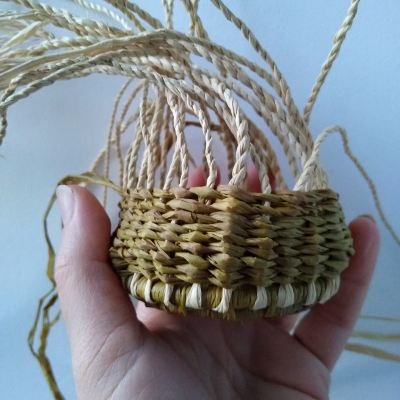 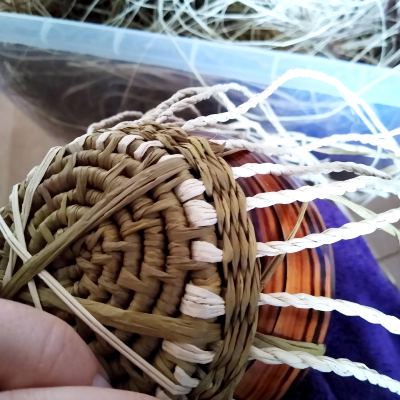 My main difficulty using a mould has always been it slipping. I should probably make some proper moulds instead of using objects from around the house!

I tied this one on as well as I could, with some extra raffia, but still found slipping to be a problem. I was really determined to make this work, so I took my time and held everything in place while I was weaving.

I also wanted to address the tension issue, because as you can see, from the picture above – in places the weave was quite loose, rather than fitting together tightly.

I remedied this, by giving the raffia a couple of extra twists, each time it passed round the back.

Matt said that he didn’t know about the basket, but that I had plenty of tension, as he watched me with lines of concentration on my face, desperately trying to hold everything in place.

The effort was worth it though, as the basket started to take shape and this time I was happy with the weave. 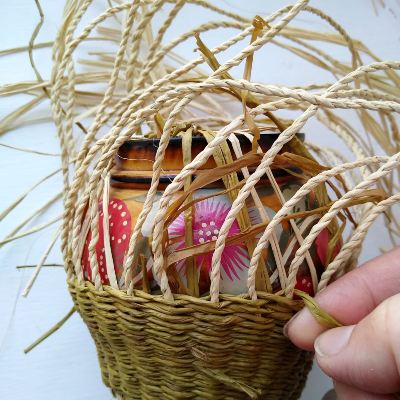 I finished the basket by weaving the undyed raffia cordage, into a simple trac border. It still didn’t feel finished to me, until I added a natural raffia fringe.

I’m really happy with the combination of coil and twining and it’s something that I am keen to do again. I’m definitely going to look into mould making though, as my shoulders really suffered from me being so tense!

The daffodils are quickly fading now, but everyday they are being replaced with other flowers and the arrival of dandelion season, will keep me busy. The daffodils still have another gift to give though. Once their leaves begin to fade, I will be collecting and drying them for weaving. 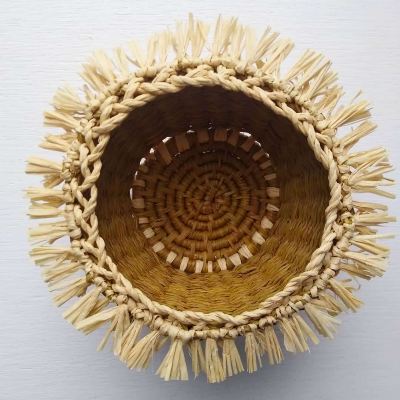 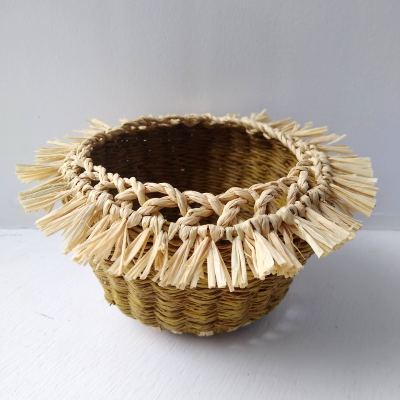